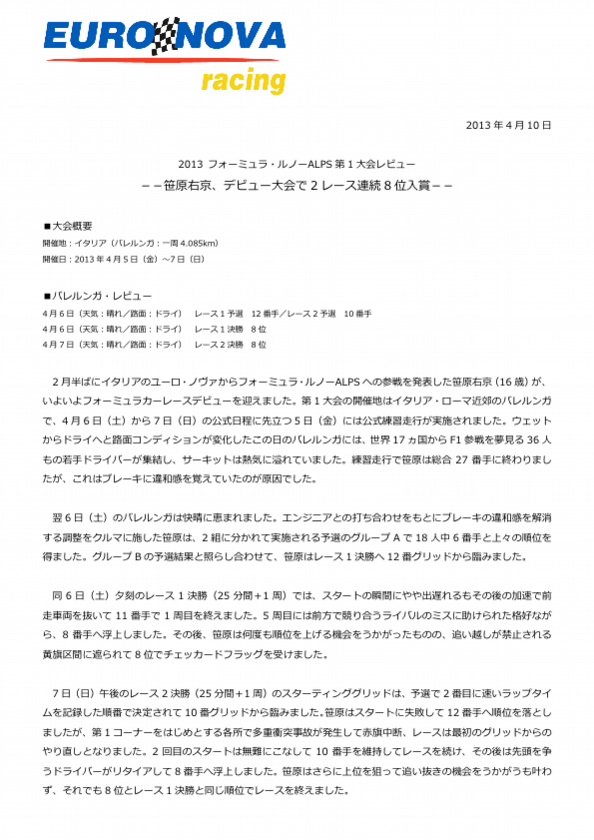 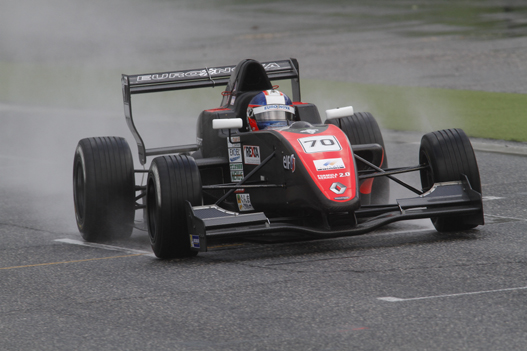 RAMSAY AND SASAHARA FINISH ALPS DEBUT IN THE POINTS FOR EURONOVA
The 2013 Formula Renault Alps Championship got underway today at Vallelunga and Gregor Ramsay and Ukyo Sasahara bought home Euronova’s first points by finishing 7th and 8th in race 1. Javier Amado continued to suffer from the bad luck that plagued him in free practice and qualifying and was taken out as he battled his way through the field.

Yesterday’s free practice sessions were marred by rain and all three drivers sat out the first session, choosing instead to take to the track for the second and third sessions, the last of which was dry. Qualifying this morning saw the field split in to two groups. Ramsay and Sasahara qualified on row 6 whilst Amado was able to complete only three laps before a brake disc problem forced him to return to the pits, meaning he would have to start from the back row for both races.

The sun was shining on Vallelunga for today’s 25 minute race. All three drivers made good starts and Amado started immediately fighting through the drivers ahead of him. By the end of lap two he had moved up from 36th to 28th but then a car in front of him spun and took him out of the race. Meanwhile Ramsay and Sasahara were picking off the cars ahead of them, and by the end of lap 2 they had both gained 3 positions. On lap 5 they both made it past Villemi and set about chasing down the gap to Silva in 6th place. In the last quarter of the race they closed up on the Brazilian but couldn’t find a way past and Ramsay took the chequered flag in a creditable 7th place with Sasahara right behind him in 8th, completing his first ever single seater-race with a points finish.

Sasahara: I think that was not bad for my first ever race! I didn’t make a good start and I made a lot of mistakes, especially at the beginning of the race when I ran wide several times while passing other drivers but I’m quite content with my finish and hope to keep improving. At the end I got quite close to Gregor but as I couldn’t get past him without a big risk I decided to hold back. 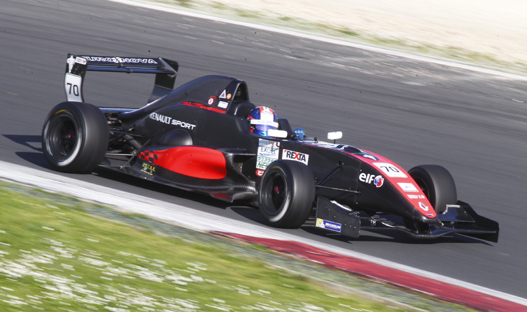 SASAHARA IN THE POINTS AGAIN IN RACE 2 AT VALLELUNGA

Ukyo Sasahara finished in 8th place again at Vallelunga today completing a fine weekend which saw him finish in the points in his first two single-seater races.

Sasahara started race 2 from 10th on the grid, Ramsay from 21st and Amado from 34th. The 25 minute race was aborted after just one and a half laps due to a mid-field accident. A great shame for the Euronova boys who had all made great starts; Ramsay had gained 5 places over the course of the first lap and Amado had moved up an astounding 10 places.

The race was re-started over a shorter period of 19 minutes. When the lights changed Sasahara maintained 10th place but half way round the first lap Ramsay was pushed off the track by another car.

His Formula Renault jumped over the grass and he was forced to return to the pits to replace his nose, losing a lap in the process. He rejoined and his pace showed that had he not had to pit he would easily have been once again among the front runners.

As the race continued Sasahara maintained his 10th spot and set about challenging Capitano ahead of him whilst Amado battled his way up through the field from 34th on the grid. When Bonifacio and De Vries clashed in the closing stages of the race Sasahara moved up to 8th place, an excellent result for the 16 year old debutant. Amado meanwhile had climbed up to 23rd place by the time the chequered flag fell.

The Formula Renault Alps Championship continues at Imola next month but the team will be in action again next week, testing at Misano.