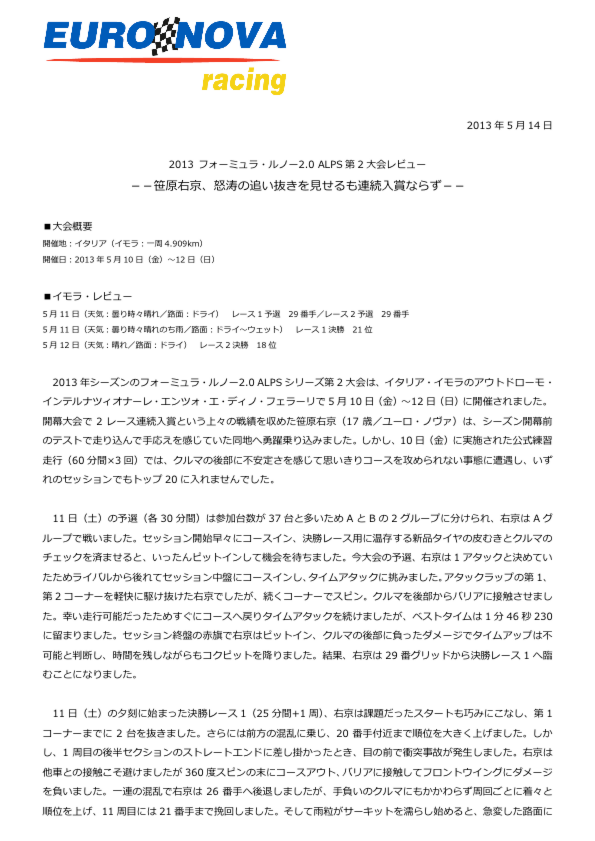 Qualifying took place yesterday morning and the large field of 38 cars was divided in to two groups. Amado and Sasahara qualified in group A, taking places on the 13th and 15th rows respectively. Ramsay earned himself a place on row 8 in the difficult group B session which was red flagged twice.
Yesterday afternoon’s first race was marred by the changeable weather that troubled the teams all weekend. The race started under sunny skies but heavy clouds arrived just as the lights changed. With ten minutes left to go Ramsay had moved up to 12th and was challenging the drivers ahead of him whilst Amado and Sasahara were running in 19th and 21st positions.

Ramsay was looking good for a points finish but then a short, sharp shower caught out several drivers, including the leader Fuoco, and the race was red flagged. The results were taken from the standings at the conclusion of the previous lap so Ramsay was classified 12th, Amado 19th and Sasahara 21st.

Today’s race saw Ramsay start from 18th, Amado from 25th and Sasahara from 29th. Ramsay made a great start and was up to 13th by the end of the first lap. He gained a further two positions on lap 2 and then set about chasing down Villemi and a place in the points zone. For the last six laps of the race Ramsay ran close to the two cars ahead of him and a points finish looked possible until on the last lap Villemi lost control of his car. Avoiding the Estonian driver cost Ramsay two places and he took the chequered flag in 13th place. Sasahara recovered from 21st to finish 18th whilst Amado was classified in 23rd, hampered for most of the race by a broken front wing.
The Alps Championship continues next month with a race at the mythical Spa-Francorchamps circuit in Belgium. The drivers will get a taste of the circuit the weekend before when they take part in the Eurocup race as wildcard entries.